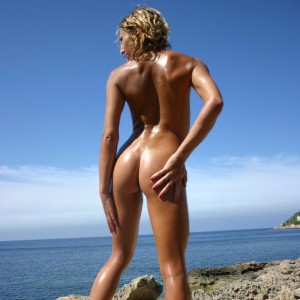 Avid admirer of the hot sexy girls who do glamour modelling so created my own side hustle GlamourClub.com in the style of the traditional British top shelf magazine. Despite doing shoots since 2003 I always consider myself an amateur with a camera so am not trying to create any high art with my content, I just want to capture the models having fun!

Scottish girl Morgan was only 18 years old when I did this shoot in 2005. She was an up and coming glamour model who had appeared in The Sun newspaper's 'Red Hot Totty' contest. She only worked up to topless levels but I'm sure you'll agree that her magnificent 18 year old tits are worth seeing in all their glory. Great body all round and a fresh faced girl next door look about her too. She was quite shy because this was one of the first times that she'd got her boobs out for a shoot. It would of course have been great for all of us if she had got totally naked, however in our correspondence beforehand it was clear that she didn't want to do anything more than topless. The shoot was in Contrast Studios in Glasgow and is one of the first shoots I did after getting a DSLR camera. I did more studio shoots back then whilst finding my way at this game. The box contains some teaser photos and 9 zip files which contain all photos from the 6 sets shot on the day.

33 files in this Box